This is part of a three-stop roundtable tour focusing on ways URC institutions work to understand and mitigate environmental impacts on human health. The tour aligns with the URC's new issue brief, Tackling Environmental Health Threats. 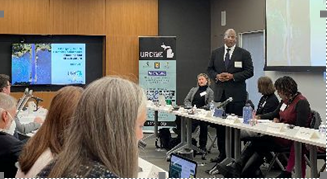 Below, find a list of event documents, a recap and further resources.

"“Flooding has been a serious concern for residents in my district, throughout Southeast Michigan and across our state. Sharing information among experts from our research universities, communities and the private sector enables us to rebuild our infrastructure and reduce our risks from flooding in smarter, more efficient and effective ways.” "

Heavy rainfall in Detroit last June left thousands without power while flooding freeways and basements. It was the second 500-year storm to occur in seven years, and the cost from the damage was significant. As this type of severe weather becomes more common, researchers and industry experts are seeking out ways to better prepare our communities to deal with this growing environmental threat.

Michigan State Representative Joe Tate kicked off the meeting by sharing a photo of a manhole cover from a street in his district, engraved with the words “Village of Fairview” — indicating it was made in the early 1900s, and still in use as part of the system below.

He then turned things over to three experts to share a summary of their work:

During the roundtable, participants discussed ways to better handle storm water, improve pumping stations and other drainage infrastructure, as well as the need to address health effects of flooding and help disaster recovery in historically marginalized and low-income communities. The collaboration between local communities and the three URC universities shows how research being conducted on campus has real-life applications in our communities, helping solve new challenges as they arise.

The need to work collaboratively to maximize funds and invest in infrastructure was clear. “There’s this notion across the country that under-investment saves money, said Jim Nash, Oakland County Water Resource Commissioner. “Keeping costs down doesn’t save money, because the cost of fixes goes up when we don’t invest early.”

“We have a huge education gap about what systemically happens with failing infrastructure,” shared Jay Juergensen with Juergensen + Associates. “This is all underground and nobody sees it. And support [for those repairs] needs to be grant money, so that neighborhoods don’t pass costs on to rate payers.”

The need for equitable access to flooding support and infrastructure investment was anchored by Michigan State Representative Tyrone Carter. “Water affects everybody, but there are certain communities that do not get funding ­— ever. Too many are turned down for FIMA help,” Rep. Carter said. “It’s cheaper to be proactive than reactive, and we have more infrastructure money now than we’ve ever had. The costs cannot keep falling to the people here who can least afford it.”

Sprawl and disjointed planning are known reasons for urban flooding issues, and the communities creating the problem are not often the ones who suffer the most damage.

Attendees agreed that aligning actions to protect public safety was fundamental, and comprehensive collaboration to develop a statement of work to manage large scale projects and processes would be useful. Utilities can’t solve this problem on their own, and teamwork is key.

“We’re paving our way into unmitigated sprawl. Instead, we need a comprehensive approach,” shared Chip Amoe, Director of Sustainability with Henry Ford Health. “That means alignment in water and building codes, stormwater runoff, roads and other parts of the built environment, from green roofs to slow water to natural areas to reduce urban heat. It’s got to include everyone.”

The roundtable discussion was the first of three engagement events that follow the release of a new URC report, Tackling Environmental Health Threats, which examines the impact of a variety of risks to the health and vitality of Michigan communities posed by neglecting environmental threats. Each discussion in the URC’s Health Threats Tour is intended to help bridge the gap between research and practice and provide an opportunity for new connections to be made between community and university experts and leaders.

Via the Detroit News (4/18): Panel: With infrastructure funding available, communities need to 'use it smartly'

Via WILS (4/19): Britany Affolter Caine on The Dave Ackerly Show