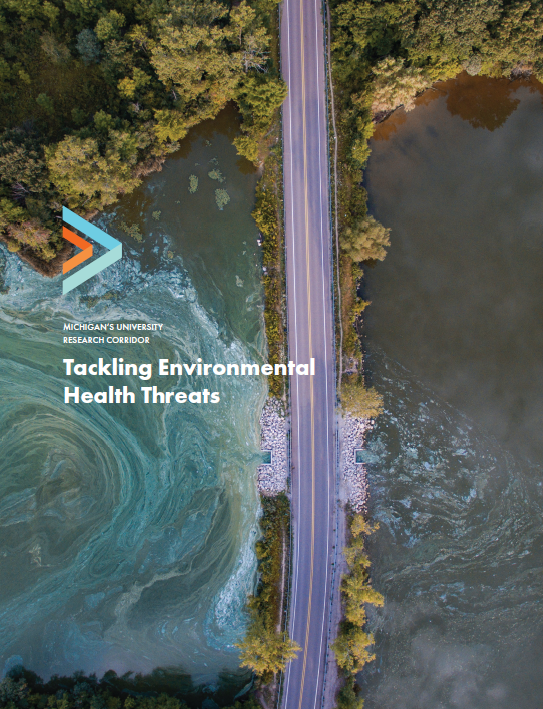 As the Great Lakes State, Michigan is endowed with incredible assets that elevate the quality of life for residents and visitors alike. But these benefits are not universal. For many communities, flooding and inadequate water infrastructure threaten public health. During each roundtable discussion event, attendees discuss the complex issues Michigan communities face.

Researchers engage with communities facing health threats ranging from disease to environmental issues. URC universities use their campuses as best-practice laboratories to test innovations and to move these innovations to the marketplace, turning discoveries into solutions.

PFAS are Per- and polyfluoroalkyl substances are called “forever chemicals” because they are extremely persistent, lasting thousands of years. The Michigan Department of Environment, Great Lakes and Energy has estimated PFAS could be found at more than 11,300 sites in Michigan — fire stations, municipal airports, military sites, refineries and bulk petroleum stations, wastewater treatment plants, old landfills, and various industrial sites.

Because of their widespread use and their persistence in the environment, many PFAS are found in the blood of people and animals all over the world and are present at low levels in a variety of food products and in the environment. Scientific studies have shown that exposure to some PFAS in the environment may be linked to harmful health effects in humans and animals. High levels of the toxic chemicals have been found in water supplies around the state and have led state leaders to begin addressing PFAS contamination.

Microplastics are found in the Great Lakes, one of the world's largest freshwater ecosystems and the drinking water source for 30 million people. The tiny bits of plastic are very common throughout the five lakes, even in tap water and beer brewed with water from the Great Lakes.in the Great Lakes and other Michigan waterways.  According to the United States Geological Survey, there are 112,000 particles of microplastics per square mile of Great Lakes water.