LANSING, Mich. – Michigan’s three major research universities are benefitting every region in the state by providing businesses with the graduates they need, enabling students to obtain valuable degrees, conducting cutting-edge research and contributing to communities statewide, according to an economic impact report prepared by Anderson Economic Group (AEG). 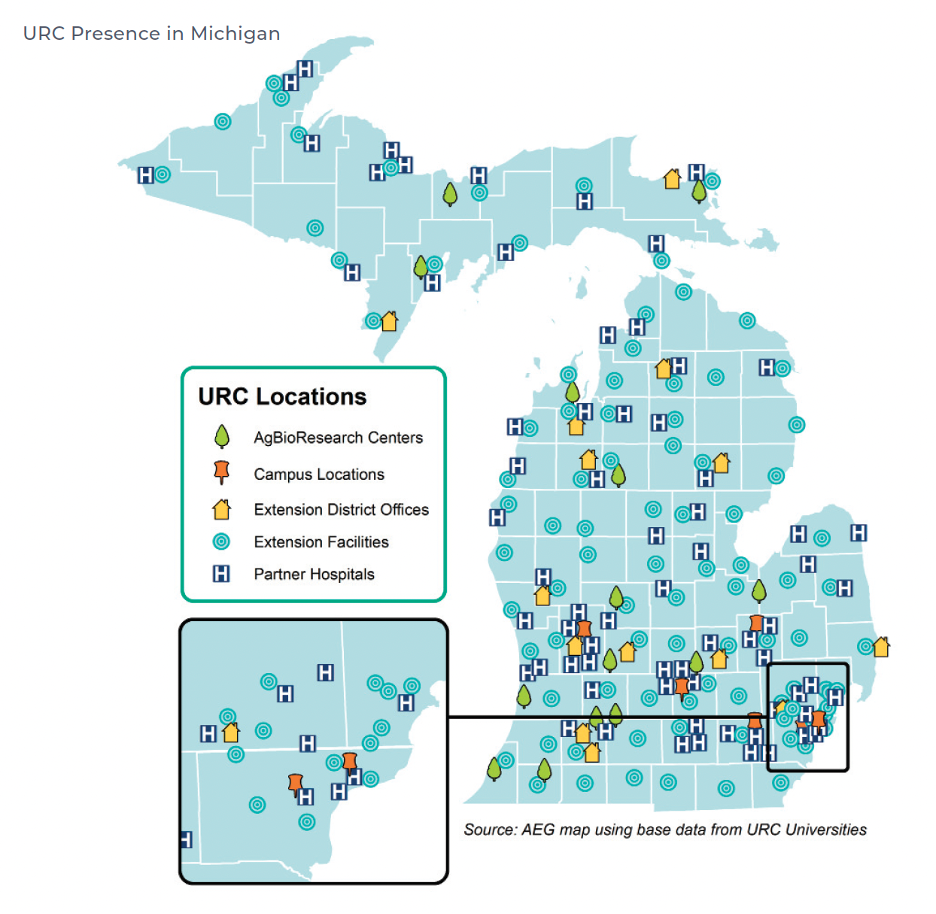 “Over the past dozen years, Michigan went through the Great Recession, saw an extended period of job and income growth, then entered the pandemic year of 2020,” said Patrick Anderson, AEG CEO and president. “This report is based on data from just before the pandemic started, so it does not capture pandemic-related losses. But it does demonstrate conclusively the importance of the URC to jobs and income in this state, through good times and bad.”

The URC’s $19.3 billion net economic impact in Michigan in fiscal year 2019 – the most recent year data is available – is up 50% from its net impact of $12.8 billion in 2007, the first year the report was published. The $19.3 billion net impact also is more than 20 times greater than the $924 million the state spent on the three universities in FY 2019, according to the report.

Enrollment at the three universities has grown by more than 16,600 students since 2007, with 141,000 students enrolled in FY 2019. They come from every county in Michigan, with 70% of URC students calling Michigan home. The URC universities also attract students from every state in the country and from 100 other countries. This talent pipeline is a major benefit for Michigan businesses.

“One of the most important assets a state can have is universities that produce graduates who keep the economic engine running,” said Mike Jandernoa, founder and chairman of 42 North Partners in Grand Rapids and former CEO of Perrigo, the nation’s largest manufacturer and marketer of store brand over-the-counter drug and nutritional products. “Our top-ranked research universities invest more to train graduates in high-demand jobs. These efforts allow our universities to be vital pipelines for the graduates in health care and business that companies such as Perrigo need to grow and prosper.”

As of spring 2020, the URC had more than 1.3 million alumni worldwide. Over 690,000 URC alumni live in Michigan, accounting for 10% of the state’s population over the age of 24. URC universities have alumni in every county in Michigan, every state in the U.S. and 180 countries across the world.

In 2019, URC operations generated revenue for the State of Michigan through employees and alumni — revenue it wouldn’t have received if the URC didn’t exist in Michigan. The report found that URC increased Michigan tax revenue by $640 million while also generating $10.8 billion in incremental earnings for Michigan households through university operations and capital spending.

“Michigan’s URC has become a national model for supporting the economy of its home state, while fulfilling its mission of education and research,” Anderson said. “We have benchmarked these Michigan institutions against the best in Massachusetts, California, Texas and North Carolina, and we have done so vigorously for a dozen years. This year’s report shows that Michigan’s research institutions continue to be world leaders and important job and income generators in our state.”

Engaging Detroit: URC's Contributions to Resurgence in the Motor City