LANSING, Mich. – April 9, 2018 – Michigan’s University Research Corridor (URC)—an alliance of Michigan State University, the University of Michigan and Wayne State University—released its 11th annual benchmark report, which cites the URC as the best in the nation for awarding advanced degrees in medicine and biological science. On an annual basis, the URC measures its performance against the nation’s top research clusters making contributions and critical breakthroughs that power the nation and serve their respective regions.

The Benchmark Report reinforces the URC’s commitment to Michigan and its local stakeholders as a willingness to benchmark itself against well-known, competitive university innovation clusters, such as California’s Silicon Valley, Massachusetts’ Route 128 and North Carolina’s Research Triangle. This year, Michigan’s URC makes the top three out of eight research clusters in the innovation power ranking, an index of key metrics for research universities, including talent development, innovation activity in performing research and development (R&D), and technology transfer activity.

Talent is critical to continued economic growth and vitality in Michigan’s top industry sectors. The URC is particularly competitive among its peer university research clusters in developing top talent in high demand fields for both four-year and advanced degrees. The URC ranked first for awarding advanced degrees in medicine and biological science. Medical education is important in the state where 42 percent of the state’s practicing physicians attended a URC medical school (Public Sector Consultants, 2013). Among its peer clusters, the URC also ranks first in student enrollment with nearly 155,000 undergraduate and graduate students, and second in degrees awarded – more than 35,000. Of these degrees awarded in 2016, nearly 11,500 were awarded in high-demand fields (computer science, engineering and business), which ranks the URC third among its peer clusters and positions Michigan to be nationally competitive.

Michigan is a top 10 state for conducting total academic R&D and federally-funded academic R&D, bringing in resources from the nation to drive not only technological discoveries, but also the businesses and jobs in the state that support the university research enterprise. Michigan’s national competitiveness is due primarily to the scale of research conducted at the URC institutions, which account for 92 percent of all academic R&D and 94 percent of all federally-funded academic R&D. Michigan’s URC conducted $2.3 billion in R&D in 2016, an increase of 53.8 percent since 2007—a growth rate that surpasses the national average for research universities and the average among its peer clusters. 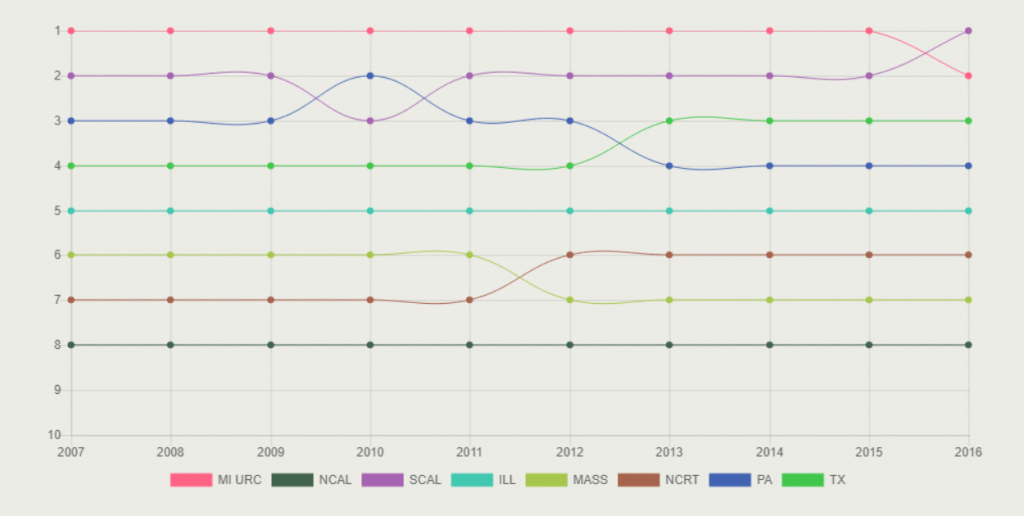 The URC continued to increase its technology transfer outcomes. In 2016, the URC surpassed its five-year averages for all measures for patent and licensing activity, except licensing revenue. It ranked fourth in average annual number of patent grants, and third in licenses and options issued among its peer clusters. Over the past several years, the URC has developed and expanded incubators, small business and start-up support services, and grant programs for different stages of business development. The URC produced 20 start-ups in 2016, more than the most recent five-year average. Since 2002, the URC has cultivated 230 start-up companies, 81 of which have formed within the past five years—launching on average more than one new company every month.

“While many top institutions in the state are competing, URC is proud to work collaboratively to improve quality of life for the Great Lakes region while advancing knowledge at a global level,” said Britany Affolter-Caine, interim executive director for Michigan’s URC. “This report is our annual effort to serve our stakeholders in identifying the areas in which the URC is competitive, leads and has the potential to grow.”