Engaging Detroit: URC's Contributions to Resurgence in the Motor City

LANSING, Mich. (June 2, 2016) – Michigan’s University Research Corridor added $958 million in economic activity to the city of Detroit in 2015, or the equivalent of $1,400 per Detroit resident, along with hundreds of programs that improve lives and advance neighborhoods, according to a report released today. 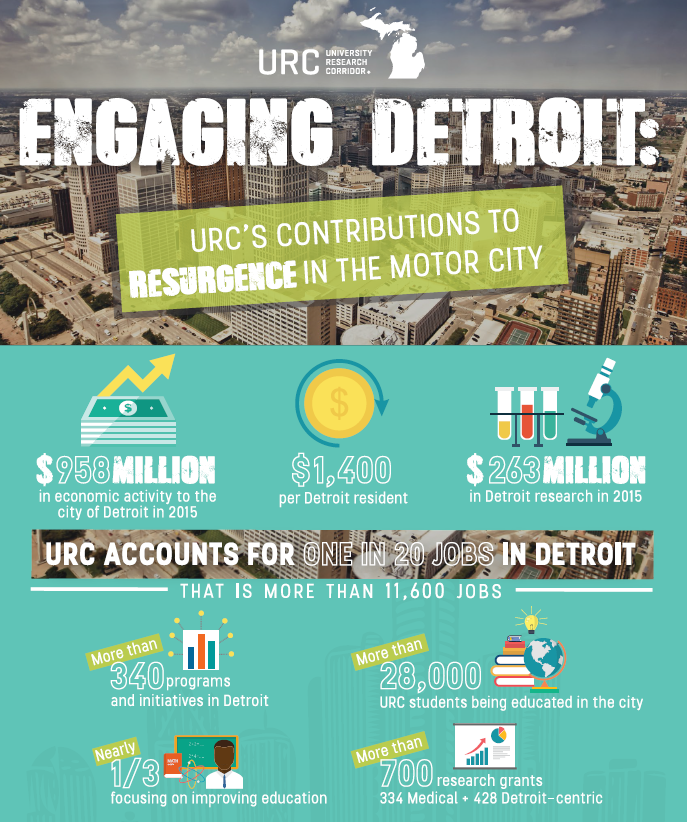 Beyond jobs and economic investments, “Engaging Detroit: URC’s Contributions to Resurgence in the Motor City,” prepared by Lansing, Mich.-based Public Sector Consultants, documented the URC’s commitment to the people of Detroit through teaching and research, volunteer work, business incubators and other initiatives.

“The URC universities believe in the city of Detroit and the indomitable spirit of its people,” said URC Executive Director Jeff Mason. “Detroit’s resurgence is an ongoing effort that requires the tireless work of many for the betterment of the whole, and this report brings to light the important role that our three universities have played, and will continue to play, in that effort.”

The URC conducted $263 million in Detroit-related research in 2015, through more than 700 research grants. More than half of the grants were focused on Detroit and related policy matters, with remaining grants benefitting medical research focused on improving the lives of Detroiters.

There are more than 340 identified programs and initiatives in which the URC universities are engaged in Detroit, nearly one third of which were focused on improving education. Other URC programs focused on the arts, community building, economic revitalization, community service and public health.

“Wayne State University is deeply invested in the city of Detroit—in fact, it’s a guiding force in our strategic plan,” said Wayne State University President M. Roy Wilson. “As Michigan’s public, urban research university—and an anchor institution in Detroit since 1868—we are uniquely positioned to work alongside the city and its people toward shared prosperity for years to come.”

One of the many ways WSU works with the city is through the Detroit Revitalization Fellows program. Part of the Office of Economic Development at WSU, the program is made up of talented, mid-career leaders stimulating progress within Detroit’s civic, community and economic development landscape. Detroit Revitalization Fellows recently received a $400,000 grant from the Fred A. and Barbara M. Erb Family Foundation to design an environmental project aimed at boosting the health and quality of life of Detroit residents. 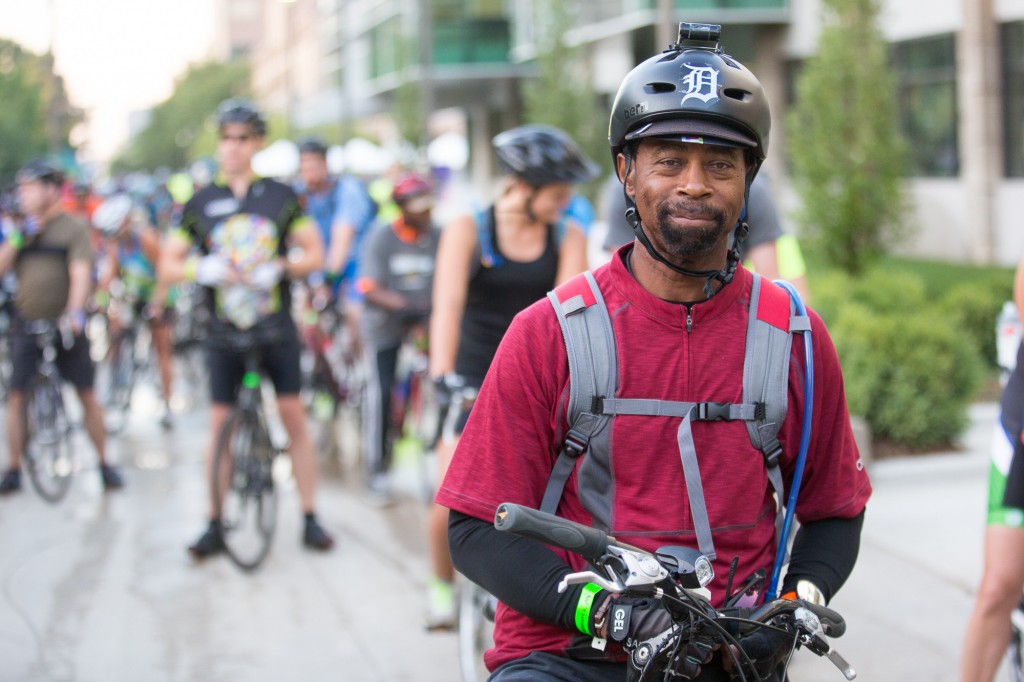 “Detroit’s been pivotal to Michigan for 300 years and has always been important to Michigan State,” MSU President Lou Anna K. Simon said. “It’s a resilient, forward-looking city, and a cradle of creativity and innovation. It's a privilege to work with our many partners in Detroit to prepare for all the tomorrows of its next 300 years.”

The MSU Product Center, part of MSU Extension which has been serving the people of Detroit since 1917, offers one-on-one business counseling and resources to assist food entrepreneurs as they commercialize, produce, package and distribute their products. It has held almost 2,000 counseling sessions in Detroit with more than 350 entrepreneurs, helping to create more than 100 jobs and supporting more than $11 million in investments.

“The University of Michigan was founded in the city of Detroit, and we have demonstrated our commitment to these roots through a continued investment in the quality of life of Detroit residents at many levels,” said University of Michigan President Mark Schlissel. “Our schools, colleges and faculty members are leading research and teaching programs, and student groups are conducting service-learning projects that work alongside residents who are creating a better future for the city. We are committed to the future success of Michigan's largest city.”

Among U-M’s Detroit-based research projects, its School of Public Health is working to combat health issues like asthma and cardiovascular disease through a $2.8 million grant from the National Institute of Environmental Health Sciences. To implement the grant, U-M public health researchers have partnered with academic peers and Detroit community organizations to form Community Action to Promote Healthy Environments (CAPHE), a collaborative initiative to help improve air quality and resident health in Detroit.

“With this important new report, the URC is demonstrating its leadership role in focusing key university resources toward a sustainable and vibrant vision for the future of Detroit,” added Comerica Bank Chief Economist Robert A. Dye, Ph.D.

The more than 11,600 jobs identified included more than 8,000 faculty and staff working in Detroit, as well as an additional estimated 3,600 jobs created through economic activity. There were also another 28,000 students being educated in the city, contributing to the city’s economic activity and workforce retention. In addition to the jobs and economic activity created by university expenditures, the spending of alumni and students living in the city also makes an important contribution to Detroit's economy.

The universities’ economic activity included more than $10 million in Detroit tax payments in 2015 alone, translating to critical funding for public services. To estimate the impact of the URC in Detroit, the report included only zip codes located primarily within the city’s boundaries.

The full report is available HERE.